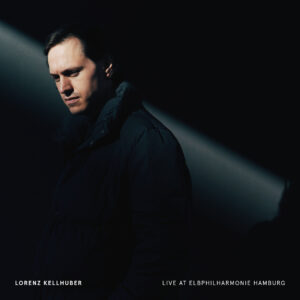 stream, download or get the album on CD here

„Hardly anyone is likely to walk between jazz and ‚classical piano music‘ in such a spectacularly oscillating way as the pianist Lorenz Kellhuber. Whether improvising over ostinati in changing positions or between free tonality and bound harmonic sound anchors, Lorenz Kellhuber creates an intimate, concentrated situation between himself, the piano, the room and his audience,“ writes the Neue Musikzeitung about Kellhuber’s current solo album „Live at Elbphilharmonie Hamburg.“

Classical music is firmly anchored in his DNA, jazz taught him to stand on his own two feet – and in free improvisation Lorenz Kellhuber repeatedly finds the boundless fulfillment of his musical vision, a Contemporary Chamber Music. He plays with his own musical history, intuitively seeking out various stations of his musical imprint, ranging from the Baroque to the Modern. There are no limits, except his own artistic demands. In this way he creates unique snapshots with his concerts, which demand a concentrated willingness to listen – and which reward this listening with the discovery of an incomparable world of sound.

Born in Munich in 1990 as the son of two church musicians, Lorenz Kellhuber began classical piano training at the age of five. At the age of eight he plays his first concert and begins to compose his own music. At the age of eleven he is a junior student at the HfKM in Regensburg and later receives lessons from Prof. Franz Massinger, a student of Arturo Benedetti Michelangeli. Shortly after, he is discovered by Rob Bargad (Nat Adderley Quintet) and intensively introduced to jazz styles. At the age of only sixteen, Kellhuber passes the highly gifted exam and becomes a student at the Jazz Institute-Berlin, where Kurt Rosenwinkel, Hubert Nuss, Greg Cohen and John Hollenbeck are among his instructors. During his regular stays in New York, he also receives lessons from Fred Hersch and Sophia Rosoff. In 2010, Kellhuber graduates as one of the world’s youngest bachelor’s degree graduates.

In the summer of 2014, Monty Alexander selects him as the first German musician to win the prestigious Montreux Jazz Piano Solo Competition. In 2016 he is nominated for the ECHO Jazz in the category „Newcomer of the Year“, and in 2018 he is one of the ten „new key players“ in the magazine „Jazz thing“. He has released a total of eight albums, an EP, and several solo pieces since 2012, including „The Brooklyn Session“ (2015), recorded with New York musicians Orlando Le Fleming on bass and Obed Calvaire on drums, the solo albums „Live at the Montreux Jazz Festival“ (2017), „Contemporary Chamber Music“ (2021), and „Live at Elbphilharmonie Hamburg“ (2022), and the two trio releases „Samadhi“ (2019) and „About: Blank“ (2020) with Felix Henkelhausen on bass and Moritz Baumgärtner on drums. His concerts have taken him throughout Europe, to the USA and to South America.